Monsummano Terme is in northern Tuscany, in the province of Pistoia, halfway between Florence and Lucca, at the foot of Monsummano Alto hill that, with its fortress and mighty walls dominates the lower city that dates back to the Seventeenth century. 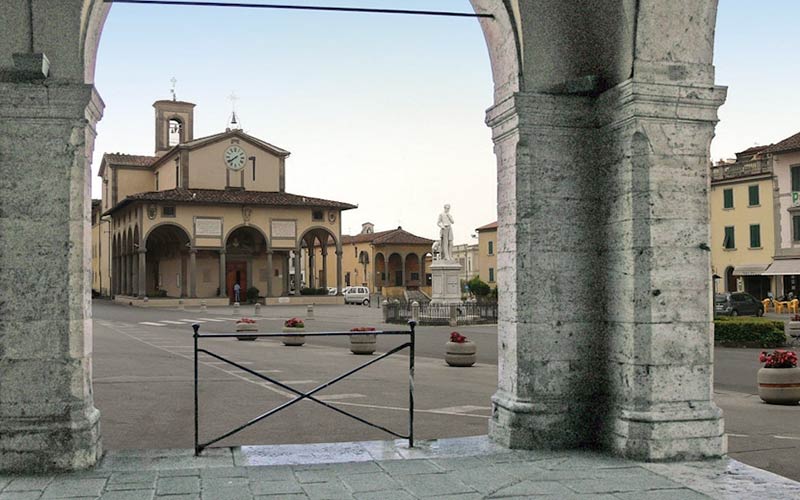 In 1602, following the miracles of a Virgin, represented in an ancient tabernacle, the Grand Duke Ferdinando I commissioned the construction of a sanctuary on the lands previously reclaimed to Gherardo Mechini, the grand-ducal architect. He designed a Latin cross monumental church, the “Santuario di Maria SS. della Fontenuova”, and a square able to host large crowds on which he also built the “Osteria dei Pellegrini”, today seat of the “Museo della Città e del Territorio” (Town and Territory Museum).

In the XIX century, the city lived an important period due to the presence of two personalities of the political and literary world: the poet Giuseppe Giusti, whose native house is today transformed into a Museum, and Ferdinando Martini, literate and politician, whose last residence, Villa Renatico-Martini, today is seat of the “Museo di Arte Contemporanea e del Novecento” (Contemporary and Twentieth Century Art Museum). 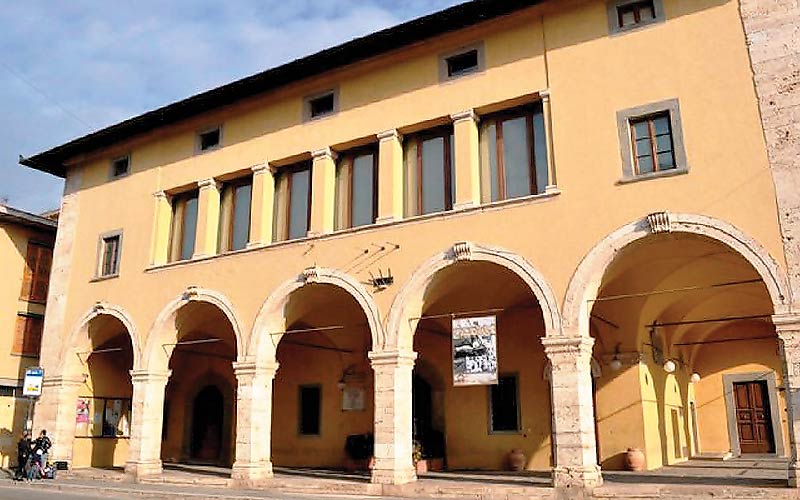 Other show-pieces of the city are the discovery of Grotta Giusti that dates back to the mid XIX century: unique natural grottos, today supported by modern thermal bath establishments and a large outdoor thermal swimming pool, and the recent refurbishment of the Theatre named after another famous fellow-citizen Ivo Livi, better known as Yves Montand. 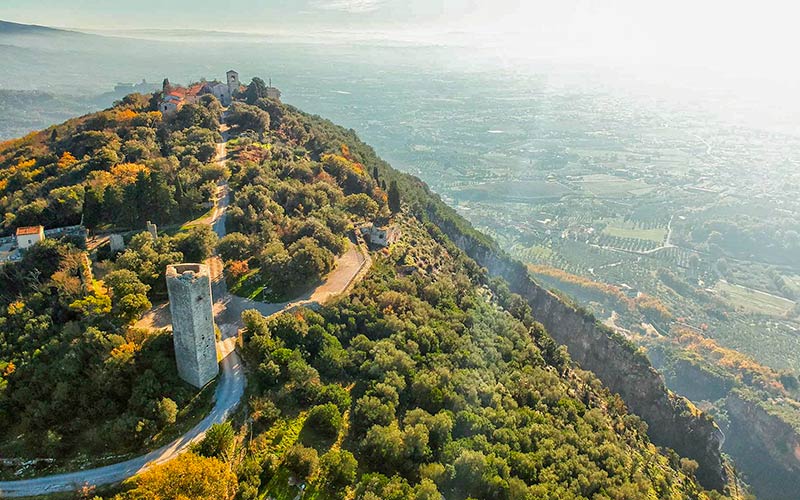 A place of great historical-cultural and naturalistic importance; located at the western margin of Montalbano area, it rises with its truncated conical shape about 350 m above sea level. Inhabited in the early Middle Ages, it was a “castrum” fortified military camp, documented already in 1005, which after various events was subjected to Florentine signoria.

Today, of the ancient castle on the hill are preserved only the remains of the elliptical walls that surrounded the castle with a perimeter of about two kilometres and two of the three access doors: the north-western “Nostra Donna” door, and the one called “del Mercato” or “Porticciola” that, practically intact, faces the hill of Montevettolini. Of the numerous towers that equipped the castle remains, at the western extremity of the walls, a sturdy pentagonal tower, which is among the most impressive of the entire provfince. The best preserved building of the hamlet is the Church of San Nicolao.

It is located inside the ancient walls of Monsummano Alto hamlet. Through a staircase you access the central entrance portal, framed by remarkable door-jambs and architrave, on which is positioned the lunette lancet arch. At the top, just below the pitched roof, a small central oculus opens. Also the inside is extremely simple, there is the altar that dates back to 1674, inserted in the apse and surmounted by a precious wooden Crucifix datable between the late XIV and early XV century and two typical Seventeenth century stone altars with gabled aedicule, next to the lateral walls. At the right of the facade there is a bell tower that has a passageway with vault covering at the base. 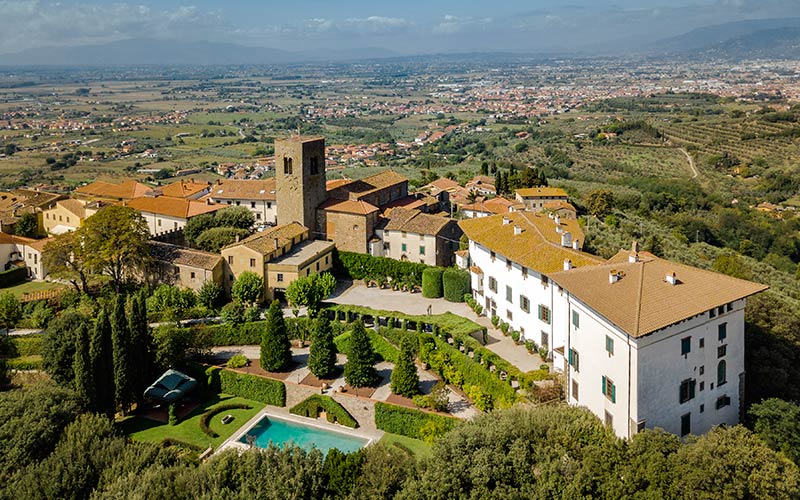 Montevettolini rises on a hill with olive trees at 187 metres above sea level. It was also founded as “castrum” around the XII century and preserves many traces of its ancient aspect. According to tradition in the early period it could have been called “Montescuffione” or “Montescuffioni”, maybe because of the coif on the coat of arms. The current name probably derives from Vitula, the Roman goddess of mirth or life, or from the cultivation of vines. Over the decades the complex historical events that characterised Valdinievole lead Montevettolini to be first subjected to Pistoia, then Lucca and lastly, in the XIV century to Florence. The Florentine Gran Dukes elected Montevettolini hunting ground.Therefore the MediceanVilla, built on a previous ancient fortress, and many other patrician residences were constructed. In 1775, Pietro Leopoldo, with the creation of “La Comunità delle due Terre” (the Community of the two Lands), united the territories of Montevettolini and Monsummano, in a sole town “La Comunità delle due Terre di Valdinievole” today Monsummano Terme. Evidences of the medieval period are: the Palazzo Comunale (Town Hall), and the Pieve di San Michele (Parish church of San Michele) of the XII century, it was transformed many times until reaching its current aspect in the Eighteenth century. Moreover, particularly fascinating is the octagonal tower, called “Sprone” or “Murina” and the door of the Vicino or Malvicino, perfectly preserved as the door of the Cantone that became part of the Medicean Villa.

Where the town church rises there is a chapel dedicated to San Michele, belonging to the parish church of San Giovanni Battista and San Lorenzo a Vaiano built in the XII century. Over the centuries it was enlarged with the addition of the two aisles and external portico. It became parish church after the abolition of the parish of Vaiano in 1449, when it was also consecrated to San Lorenzo. The current aspect of the church is owed to the refurbishment work started in 1733 by Vittorio Anastagi, when the ecclesiastic building was elevated and vault covered. Inside there is a high altar in polychrome marbles by Bartolomeo Moisé da Seravezza, while the walls were enriched with stucco decorations and frescoes by Felice Balsan that date back to 1740. The Church preserves numerous works of art among which the Madonna con Bambino (Madonna with Child), work of the Scuola di Raffaellino del Garbo, a Madonna con Bambino e Santi (Madonna with Child and Saints) by Piero di Cosimo, the Vergine Assunta e Santi by Santi di Tito, and works attributed to Jacopo Chimenti (l’Empoli) apart from a large wooden Crucifix of the XIV century, protagonist of a popular devotionalevent“ Festa Grossa”, that reaches its climax on Good Friday with the costume recollection of the Passion of Christ.

It was built at the end of the XVI century by Gherardo Mechini and Domenico Marcacci at behest of Ferdinando I, to be used as hunting lodge. The Villa includes the ancient fortress datable between the XII-XIII century on one side and the tower standing over the Porta del Cantone on the other. Reportedly, the ancient fortress had the same height as the Belltower and dimensions that allowed the presence of a keep, small tower where the sentries were and last shelter in case of siege. Currently it is private property. Visible only from the external.