Throughout the Middle Ages the elevated position of this town above the road between Lucca and Florence helped it to prosper, while in recent times it prospered thanks to farming and commercial activities (cattle farming and silk-worms), and the manufacturing. Looking at the emblem of Buggiano, you will find a redbull with a typical lylium flower: indeed the market is one the oldest in the whole region. Buggiano has developed three sites: Buggiano Castello, the main Municipality, on the top of the hill, then Borgo a Buggiano, the most recent area, and Colle di Buggiano, also at the top of a smaller hill laying just side by side with Buggiano Castello.

Formerly the main town of Buggiano, in a fine position overlooking the valley, sorrounded by extensive olive groves, the borgo, whose layout has very little changed since the Middle Ages, is also famous for its garden, planted with citrus trees. It is a marvellous borgo features on the main square the Palazzo del Podestà, dating back to XII century, decorated with a large number of coats-of-arms from XV and XVI century. There is a romanic church as well, with its impressive bell tower: it was founded on 1038, dedicated to the Madonna della Salute and to Saint Niccolao. The church has three naves: not to be missed the Crucifix from XIV century and and an altarpiece with the Anunciation, bestowed to Bicci di Lorenzo (1442).

Every two years there is an impressive local show, around may, where the secret and private gardens of the borgo are kept open for the public: thousands of people reach this little borgo from all over Europe, while the main plants are lemon and orange trees, tangerine trees and Killarney strawberry trees. 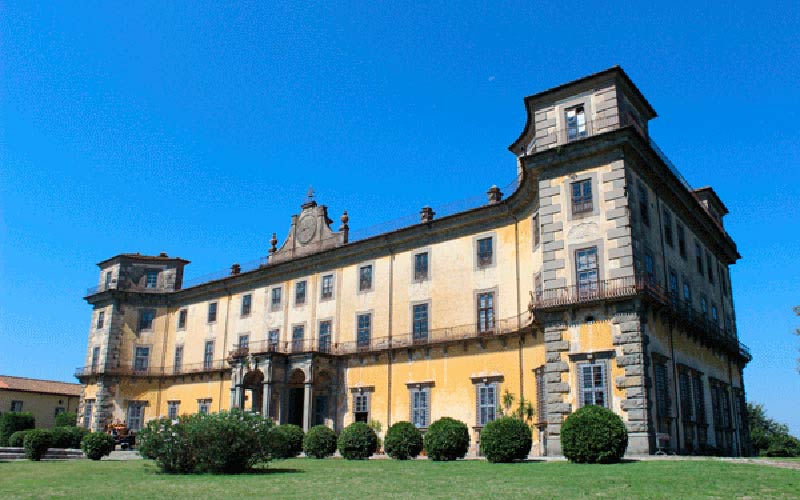 In the municipality of Buggiano we find an important building of historical and artistic interest: Villa Bellavista. The name derives from the wonderful view as far as the eye can see that can be enjoyed from the hill on which the villa stands and which stretches as far as Montalbano. When it was built in 1673, with its solemn but sober style, typical of the Florentine Baroque, it was considered the most beautiful villa in Italy after the Royal Palace of Caserta. The facade plays on the contrasts between the white of the plaster and the gray of the “pietra serena” that outlines all the openings, and is impressive thanks to the four massive corner turrets and the majestic balcony on the facade. The internal structure revolves around a large central hall with balconies and balustrades and features frescoed ceilings by the Baroque painter Pietro Dandini (1646-1712).

Don’t miss the Colle di Buggiano a squat little fortified castle dating from 1238, with its church of San Lorenzo, overlooking the main little square. Also, north of Buggiano, spend a while to see Stignano, birthplace of one of the most famous men of this land – Coluccio Salutati – , featuring a romanic bell tower, quite known for its top is Arabic – inspired, given that the architect took inspiration from Sicilian romanic taste.